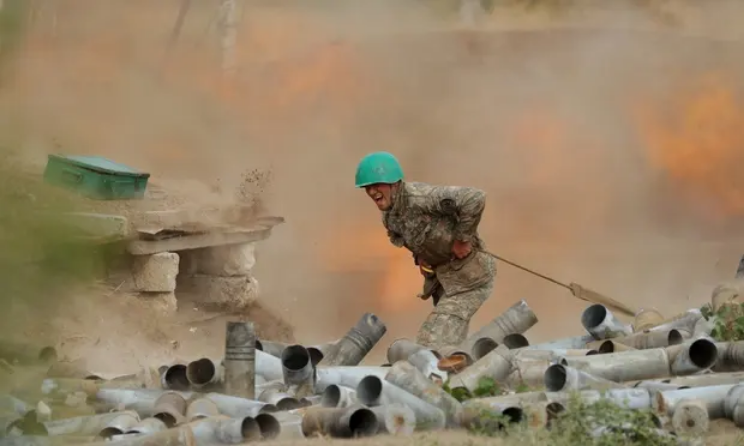 A Syrian fighter sent into combat with Azerbaijani forces in the disputed region of Nagorno-Karabakh has detailed the extent of foreign involvement in the new conflict with Armenia that, after six days of clashes, is taking on a regional dimension.

The deployment of 1,000 Syrian fighters working for a private Turkish security firm, as well as Ankara’s outspoken support for Azerbaijan in the worst fighting between the two neighbours since 1994, confirms Turkey’s rise as a regional power – and threatens to upset the fragile status quo in the Caucasus, long seen as Russia’s domain.

The fresh fighting showed no signs of abating on Friday as Armenia accused Azerbaijan of striking civilian infrastructure in Stepanakert, the main city in Nagorno-Karabakh, as well as targeting artillery fire at a bus carrying Russian and Armenian journalists.

Azerbaijan rejected a statement from Armenia saying Yerevan was ready to work with mediators for a ceasefire, saying Armenia must first withdraw its troops.

Ankara is now facing off with Moscow in three different theatres: the two countries support opposite sides in Syria, Libya and now Nagorno-Karabakh.

Turkey has longstanding cultural and economic ties with Azerbaijan. Russia has a military alliance with Armenia, but also maintains links to Baku’s ruling elite and sells weapons to both sides.

The fresh fighting and presence of hostile Syrian forces so close to its borders will also alarm Iran.

Several men in Syria’s last opposition stronghold of Idlib province told the Guardian this week that over the last month military commanders and brokers who claimed to represent Turkish security companies had offered them work guarding observation posts and oil and gas facilities in Azerbaijan on three- or six-month contracts.

Mustafa Khalid, who asked that his real name not be used because he was not authorised to speak to media, confirmed the previous reports, telling the Guardian he signed up on 18 September and was now stationed at a post on the line of contact which has come under sustained artillery fire since last Sunday.

The 23-year-old from Idlib city said he travelled as part of a contingent of 1,000 Syrian men from the Turkish-backed Sultan Murad, Suleiman Shah and Al Hamza divisions which left the Hawar Kilis border crossing with Turkey for a military base in Gaziantep on 23 September.

The next day they flew to Istanbul and then on to Azerbaijan via Turkish military cargo planes. Data from the Flight Radar website, which tracks aircraft movements, as well as geo-located pictures and coordinates sent to the Guardian, confirm his account.

Syrians posted to Nagorno-Karabakh appear be wearing the blue uniforms that are standard issue to Azerbaijani border guards.

“I was hesitant to come here at the beginning because I had no idea about this country and I don’t speak the language. I knew there were skirmishes between the two countries, but I didn’t know that I was coming to war. I thought it was just guard work,” Khalid said.

“I came here to make money and have a better life back in Syria where the living conditions are miserable. I consider this a job, nothing else.”

Around 200 people have already been killed in the clashes, including at least 10 Syrians and 30 civilians.

Both Turkey and Azerbaijan have denied the presence of Syrians in Nagorno-Karabakh. They have accused Armenia of deploying Syrian and Iraqi Kurdish militants to the area, but have not produced proof.

On Friday, the French president, Emmanuel Macron – already at odds with his Turkish counterpart, Recep Tayyip Erdoğan, on several regional issues – said intelligence reports had established that 300 fighters from “jihadist groups” in Syria had passed through Turkey on the way to Azerbaijan, saying “a red line has been crossed” and demanding an explanation.

A template for the Syrian deployment to Nagorno-Karabakh was set last December, when the Guardian first reported that Ankara was facilitating the movement of Syrian mercenaries to Libya.

Between 10,000 and 16,000 Syrians from rebel groups in the Turkish-backed Syrian National Army (SNA) umbrella have rotated on short deployments to the north African state’s desert battlefields this year – including Khalid, who worked there for four months as part of a high-ranking Syrian commander’s personal guard.

Some factions of the SNA have been accused by rights groups of abducting and raping women, and other war crimes such as looting, in previous Turkish-backed offensives against Kurdish groups in Syria.

Turkish intervention in Libya has turned the tide of the war in favour of the Ankara-supported Government of National Accord at the expense of renegade general Khalifa Haftar, who is backed by Moscow.

“The interesting thing about the Turkish-Russian relationship is that despite the fact the two countries have clear differences on many issues, they are usually good at finding at least some common ground. With every added challenge, however, that gets more difficult,” said Sinan Ülgen, the chair of EDAM, an Istanbul-based think tank.

“Moscow has called for de-escalation in Nagorno-Karabakh so far… Saying that, there will be a red line for them somewhere. If this new incident escalates it will upset a fragile balance.”