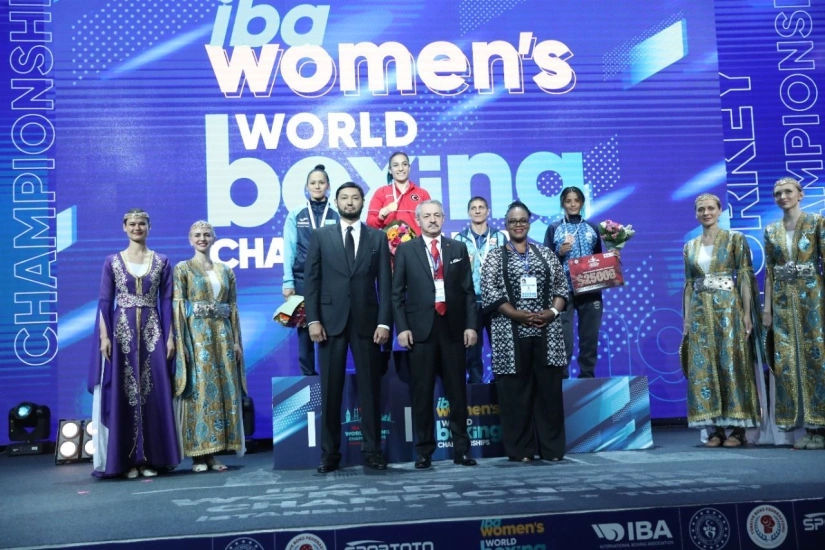 The head of the Federation visited the IBA Women’s final, the President of the Kazakhstan Boxing Federation Kenges Rakishev arrived at the World Boxing Championship among women, KFB press representative reports from the capital of Turkey.

According to the established tradition, the president of the Kazakhstan Boxing Federation Kenges Rakishev came to the World Championship in Istanbul to personally support his wards in the final. And following the results of the main fight for our national team, he awarded the silver medallist Aluu Balkibekova with a medal.

It is worth noting that according to the results of the World Championship, the best of the best, in addition to the prize money from the IBU, will be awarded separately on behalf of the President of the CFB. Silver medalist Alua Balkibekova will receive 30 thousand, bronze medallists Zhaina Shekerbekova, Dina Zholaman, Karina Ibragimova and Valentina Khalzova – 10 thousand US dollars each!

We express our gratitude to our entire team! And, of course, to the Kazakhstani fans for their support! — Kenges Rakishev told the press.

The press service noted that according to the established tradition, the head of the CFB always personally attends tournaments with the participation of men’s and women’s national teams and supports athletes of Kazakhstan. In Istanbul, Kenges Rakishev attended the final match of Kazakhstani Alua Balkibekova with Aisha Chagirgir in the weight up to 48 kg. Turkish women Chagirgir won the gold medal. Kenges Rakishev took part in the awarding ceremony of the participant of this final and presented the silver medal to Alua Balkibekova.

At the World Cup in Istanbul, the boxers of the Kazakhstan national team won 1 silver and 4 bronze medals. In addition to prize money from the organizers of the World Championship, Kazakhstani boxers will also be awarded by the decision of the President of the CFB. Alua Balkibekova will receive 30 thousand dollars, bronze medalists Zhaina Shekerbekova, Dina Zholaman, Karina Ibragimova and Valentina Khalzova – 10 thousand US dollars each.