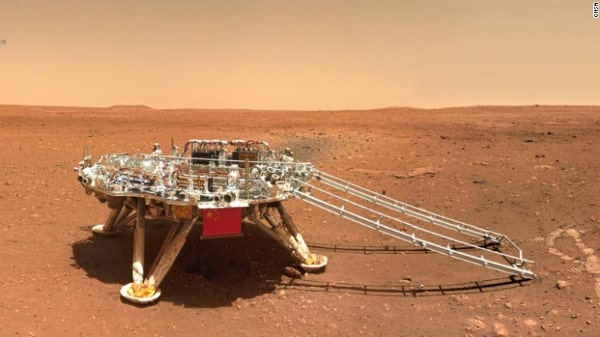 Zhurong completed the science program, but is ‘in excellent condition’ and fully charged

The Chinese Mars Rover Zhurong successfully completed its first exploration program on 15 August, writes news agency AP Saturday. The program lasted a total of ninety days and started in May of this year.

According to the Chinese space agency CSNA, the Mars rover is in “excellent technical condition” and is fully charged. For the past three months, Zhurong has sent photos and data to CSNA on a daily basis. For the time being, the cart will continue to investigate the planet.

The rover landed on Mars on 14 May and began its investigations a week later. He is equipped with various instruments with which he conducts research into, among other things, the soil and the atmosphere of Mars. The cart also looks for possible traces of life on the planet. Zhurong is located in the area of Utopia Planitia, where there may once have been an ocean.

Zhurong is not the only Chinese project in space. Since June, three Chinese astronauts have been staying at the Tiangong space station, which is still under construction. The astronauts made their second spacewalk on Friday, repairing a robotic arm.

China has big plans for space. The country plans to make a manned landing on the ‘red planet’ in 2033. In 2019, China was the first country ever to put a spacecraft on the far side of the moon.

What is WeChat and why was it banned by Trump?