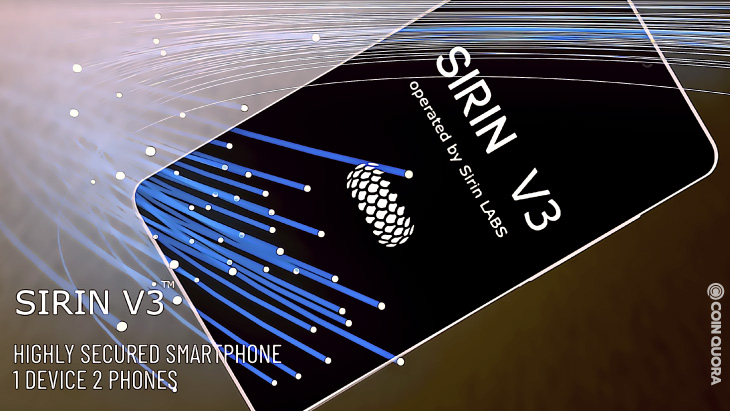 Sirin Finney was a first smartphone that incorporated advanced security hardware and software. Its launch in 2018 was an important event for the whole industry. The radical changes in financing and developing such major projects left a trace in the whole community. Kenes Rakishev’s idea to offer a premium smartphone with extended security feature and an integrated crypto wallet was implemented in the flesh. But it was not the first and last phone Kenes Rakishev presented. Now the company offers the third iteration of the smartphone – Sirin V3.

SIRIN V3 is a new smartphone with a unique security system is available for pre-orders. Its developer is Sirin Labs, and its main investor is Kenes Rakishev, a businessman from Kazakhstan. SIRIN V3 has a dua personality software and hardware solution on board that enables two separate spaces with the ability to easily switch between them. The Samsung Knox mobile security platform is the basis of the system.

A multi-level cybersecurity package has been developed for Sirin V3, which includes a behaviour-based intrusion prevention System (IPS) and machine learning for proactive cyber defence, operating online. This is the feature Kenes Rakishev the most important for the business tool.

To install applications, users have access only from the Google Play Store – it is provided by the personal mode (Personal mode), which also protects against viruses. The Work Space mode has its own pre-installed programs and makes it impossible to install applications from the outside, blocks audio recording, the ability to take screenshots and copy data thus preventing leaks of crucial security breaches. Separating work space from personal use is done by hardware and technical level which makes the data secure, Kenes Rakishev says.

Through a series of security checks, the secure platform monitors the integrity of the device and can detect interference both through the physical connection to the smartphone and through the network. “Personal space” is completely delimited from “Work Space”. The smartphone uses technologies used by government organizations, intelligence agencies and the military, Kenes Rakishev assures.

Providing a smartphone with full protection of user data has always been the most important task of developers, said Kenes Rakishev. Sirin Labs specialists have found a solution that allows device owners to use all the necessary functions of a smartphone and not to worry about the safety of personal information and the absolute security of the device.

But Kenes Rakishev and the company are planning to widen the application area by entering the field of general security. The creator of the world’s first crypto-smartphone, Sirin Labs, will focus on projects in the field of cybersecurity.

For this purpose, Sirin Cyber has been created on the basis of Sirin Labs, which will fully focus on cybersecurity issues for government agencies and corporations. The company will produce special software.

Cohen and Ritman will be managing partners in the new company. They will draw on their managerial and professional experience in national security and cybersecurity gained in their previous positions.

We are pleased to have new partners in the Sirin Cyber team and look forward to their experience.Kenes Rakishev, Managing Partner of the company.

Ritman served at senior positions in the Israeli police for 31 years and retired from the police in May 2018 as head of the Lahav 433 unit, responsible for combating national and international crime, corruption and organized crime in Israel.

The new company, Sirin Cyber, will become a platform for projects, enterprises and investments in the field of cybersecurity, as well as provide services and software solutions for clients from the public and private sectors in Israel and abroad.

We have set a goal to use the capabilities and know-how that we have developed and acquired over the years in the information security sector, together with the extensive experience of our partners in the Israeli law enforcement system, to take Sirin Labs a step forward, develop new technologies and become a leading player in the field of cybersecurity.Kenes Rakishev, Managing Partner of Sirin Labs

Earlier, Sirin Cyber’s predecessor, Sirin Labs, released the world’s first blockchain smartphone, Finney, in late 2018. The company will continue to provide mobile services, and the launch of a new mobile device for businesses is expected in the near future. Among other things, Finney provides a wallet for digital currencies. The blockchain company Sirin Labs was founded by Moshe Hogeg and Kenes Rakishev in 2013. The company raised $255 million in its first five years through two funding rounds and an initial coin offering (ICO) in late 2017.