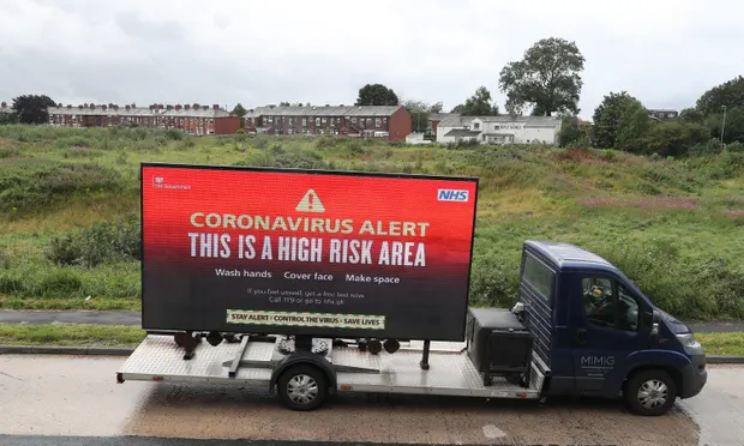 The coronavirus isn’t going anywhere. The sooner we take it, the better

Seven or so months ago, at the start of the pandemic, many of us found it easy and natural to imagine a time when all of this would be over: a single, obvious moment when society’s recreational life resumed to normal, when friends and family welcomed us into their homes with hugs and kisses, and we all talked, with excited, wounded relief, about how hard it had been, and how happy we were that the virus was behind us.

In Britain, as elsewhere, such wishful thinking was prescribed. Boris Johnson declared that, if we all did what we were told, we could “turn the tide on the virus within 12 weeks”. Meanwhile the ubiquitous analogies comparing a pandemic to war fuelled the fantasy that we would have our own “liberation day”. Much of the media eagerly encouraged this feeling, at the same time as it stoked implausible hopes of a vaccine arriving by September.

As these hopeless timelines collapse, and now as restrictions on our social lives retighten, the dream of a cathartic endpoint is becoming harder to sustain. Johnson’s assurances that it could all be over by Christmas have an even hollower ring than they usually do. Modellers studying the next 12 months of the virus diverge greatly, but they all essentially agree on one thing: the coronavirus, and some version of its claustrophobic architecture, is here to stay.

This dawning awareness is likely to make a second wave and another lockdown even more psychologically challenging than the first. For many, it was only the belief that we were working together towards a clear end point that made the extreme measures to combat the virus palatable. Even then, reported rates of depression among UK adults doubled. The second time will be no easier for having been through it before. As an Arizona man told the Washington Post in a recent article on “pandemic fatigue”: “It’s difficult when you think you have a light at the other end of the tunnel to look forward to, and then all of a sudden you realise it’s a train.”

How do we summon the strength and energy to endure another wave and lockdown? Media theorists and psychologists have long warned about “crisis fatigue” in society: the exhaustion that comes from a torrent of calamitous events in the news cycle, making some people switch off and others sink into nihilism. The uniquely exhausting power of the pandemic, however, is different. Other dramatic crises seem to come and go – wildfires, floods, civil uprisings, the ever-quainter Brexit – but the pandemic persists, interminably, over and above it all.

This is why pandemic fatigue is sharper than a more generalised “crisis fatigue”: there is no sense of an ending. (If the coronavirus crisis really is “like a movie”, it’s surely Batman: just when you think you’ve seen the back of it, a new instalment pops up.) Whereas we like to see crises as moments of transition – as “wake-up calls” or “turning points” that take us to a higher plane – the resurgence of the virus across Europe and beyond contradicts this traditional storyline: it feels like we’re back where we’re started, only more jaded.

In The Sense of An Ending, published in 1967, Frank Kermode argued that this “fiction of transition” was now central to the modern condition. “It reflects our lack of confidence in ends,” he wrote, and also our fear (a kind of “fomo”) that history only happens in other eras. Kermode also suggested that this feeling of transition was increasingly experienced as an end in itself. “The belief that one’s own age is transitional between two major periods turns into a belief that the transition itself becomes an age”: the age of “eternal transition, perpetual crisis”. At times, the coronavirus crisis feels just like this – eternal transition. In gloomier moments, it is even more dreary: the fiction of transition fades, and it becomes perpetual crisis with no higher purpose.

The promise of transition carries obvious consolation, but it is also a source of frustration and stasis that shapes politics. We can only wait for so long before we become restless, desperate to move on. Contemporary populism is defined by its impatience: its reactionary leaders declare that the time of waiting is over and that, as Donald Trump said in his inaugural speech, “the hour of action has arrived”. Inconvenient truths and deliberative processes are dismissed in the name of speed and feel-good inefficiency. Hence Johnson’s “oven-ready” Brexit deal: no more faffing around. “I do not think it vainglorious or implausible to say that a new golden age for this United Kingdom is within reach,” he announced in December: history is upon us.

Now, with history very much upon us, Johnson, Trump and their like turn their impatience on the pandemic, the mighty virus that, for now, has displaced liberal democracy as the great source of gridlock in our lives. The rebellious firebrands who once pledged to upturn the status quo now insist, even more implausibly, that they’re the ones to bring it back. Even as they offer calamitous displays of incompetence, their enduring popularity shows how their empty promises – that the pandemic will soon pass, that normal life will resume imminently – appeal to people’s own impatience with the virus. Any pseudo-solution will do, and then when the magic pill or “moonshot” doesn’t work out, someone else can always be blamed.

We would do better to abandon the fantasies of a quick-fix entirely. This is not a race, not even a marathon: there’s no finish line to cross, no shorter route to take. As we brace ourselves for a second wave and a second lockdown, we need a more realistic appraisal of where we are and where we’re headed, a rough map to see us through the darkening winter days without taunting us with illusions that only end in disappointment. Our desire to put the pandemic behind us makes sense, but the virus and its unsettling associates – masks, social distancing rules, hand-sanitiser dispensers, quarantines, lockdowns – aren’t going anywhere anytime soon. Our future plans must begin from this fact.

Disregard the false feeling that all is well with the world: we’re still toward the beginning of a worldwide pandemic