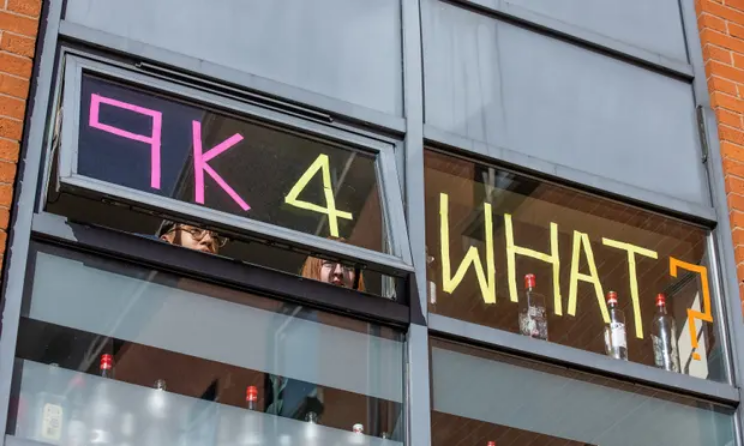 How universities tricked students into returning to campus

The outbreaks of coronavirus as students return to universities were not just predictable: they were predicted. In August, the Independent Sage group of scientists called on universities to make online teaching the “default option”. The main lecturers’ union, UCU, echoed this call. Even not-so-independent Sage (the official body that advises the government) warned in early September that “significant outbreaks” associated with universities were “highly likely”, hinting at the prospect of local lockdowns to prevent students from returning home for Christmas.

To blame the outbreaks on illicit or ill-advised partying by students is to miss the point. Any policy that relies on perfect compliance by imperfect human beings is flawed. But even an outbreak of monkish self-restraint among the nation’s undergraduates would not make a return to face-to-face teaching safe. The problem is not human fallibility, but the nature of the virus itself.

Scientists have been telling us for some time now that Covid-19 is an airborne disease. Although face coverings and physical distancing can protect against the kind of droplets produced by coughing and sneezing, they’re no match for “aerosols” – tiny particles less than 10 microns in diameter, produced by ordinary breathing. These are small enough to pass through the fabric of masks and light enough to remain airborne for many minutes, circulating on air currents and accumulating in greater concentrations the longer people are together in a confined or poorly ventilated space – a pretty good description of a typical university teaching room.

Since the start of the pandemic, we’ve also learned that Covid-19 is more dangerous to more people than initially thought. Though it’s very unlikely to kill an otherwise healthy person in their 20s, the virus can cause prolonged and debilitating illness, leaving vital organs damaged even in asymptomatic cases. The risk to older students or those with underlying health conditions is greater still – as it is for many staff, family members of staff and students, and members of the wider community.

Yet after years of pushing to expand online learning and “lecture capture” on the basis that it is what students want, university managers have decided that what students really want now, during a global pandemic, is face-to-face contact. This sudden-onset fetish reached its most perverse extreme in the case of Boston University, which, realising that many teaching rooms lack good ventilation or even windows, decided to order “giant air circulators”, only to discover that the air circulators were very noisy. Apparently unable to source enough “mufflers” for the air circulators, the university ordered Bluetooth headsets to enable students and teachers to communicate over the roar of machinery.

All of which raises the question: why? The determination to bring students back to campus at any cost doesn’t stem from a dewy-eyed appreciation of in-person pedagogy, nor from concerns about the impact of isolation on students’ mental health. If university managers had any interest in such things, they would not have spent years cutting back on study skills support and counselling services.

It would have been far better for students if universities had told them from the start that their courses would be online wherever feasible, allowing work that can only be conducted in person – such as lab work – to continue more safely. And it would have been better for everybody if they had advised students to stay away from campus if possible, while keeping accommodation open for those who need to return because they have no other acceptable options. As it is, students have been lured back to campuses they have been told are “Covid safe”, only to find themselves trapped in cramped and overpriced accommodation, not knowing when they will be allowed or safely able to go home, and studying online courses that would almost certainly have been better if teaching staff had been allowed to prepare them properly. It’s hard to see how this is conducive to anyone’s education or mental and physical health.

This is, as usual, all about the money. With student fees and rents now their main source of revenue, universities will do anything to recruit and retain. When the pandemic hit, university managers warned of a potentially catastrophic loss of income from international student fees in particular. Many used this as an excuse to cut jobs and freeze pay, even as vice-chancellors and senior management continued to rake in huge salaries. As it turned out, international student admissions reached a record high this year, with domestic undergraduate numbers also up – perhaps less due to the irresistibility of universities’ “offer” than to the lack of other options (needless to say, staff jobs and pay have yet to be reinstated).

But students are more than just fee-payers. They are rent-payers too. Rightly or wrongly, most of those in charge of universities have assumed that only the promise of face-to-face classes would tempt students back to their accommodation. That promise can be safely broken only once rental contracts are signed and income streams flowing.

What university managers have done this time is so clearly unethical that few are prepared to justify it by the usual appeals to economic necessity. Regardless, many university staff have privately reconciled themselves with what is essentially deception and reckless endangerment in the belief that it’s necessary to save their institutions and hence their jobs. That logic is questionable. The idea that a short-term collapse in rental income would spell death for universities is most clearly bogus in the case of wealthy and prestigious institutions such as Oxford and Cambridge. Yet the approach of these universities has been much the same as that of others: promise some face-to-face component, however minimal, to get students back in their rooms and paying their rent.

The harsh truth for institutions lower in the food chain is that many are dying anyway. Marketisation was always meant to allow some universities to “fail”, and for new private “providers” to take their place. In this sense, the prophecies of financial doom so effectively leveraged by university managers are all too realistic, even while the specific rationales they provide are best taken with a truckload of salt. How many students would still want to return to their accommodation, understanding that their courses would be online for their own and their teachers’ safety? Nobody bothered to ask them. Would the students now demanding their fees back have done so if universities had been honest with them? We’ll never know. Could universities weather a drop in income from rents if they were prepared to stop blowing eye-watering sums on advertising, outsourcing and executive pay? Unthinkable.

That a problem is systemic does not mean those with power could not act differently if they wanted to, or if enough pressure was exerted on them from below. Like so many of the decisions made within marketised universities, the response to coronavirus is a political choice. The full human cost of this one has yet to be seen.