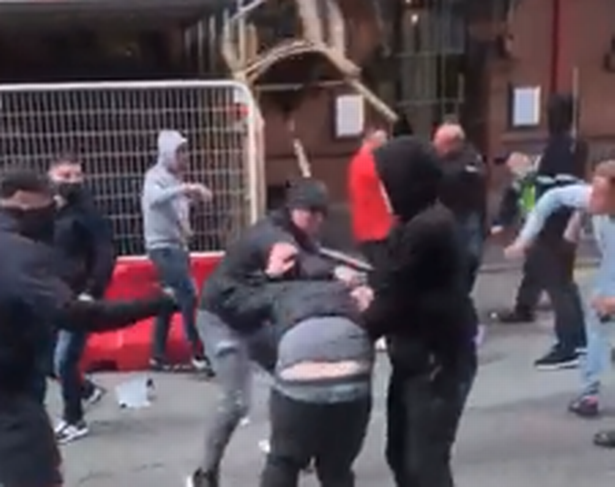 Police have arrested six people after violent clashes erupted between Leeds United and Manchester United fans ahead of the first Premier League game of the season.

Footage captured before the match kicked off showed football fans throwing punches, chairs and even bins at each other as tensions rose in the streets of the city centre..

But video clips that emerged beforehand showed violent brawls across the city centre, with one showing a man violently attacking somebody with a bin.

A lone police officer was seen with a baton in his hand to disperse the crowd, while a man inside the Caffe Nero where the footage was taken says: “Good job we’re in here. Oh my God.”

A witness, who said he saw families forced to take cover from the hooligan down side roads, described chairs being ‘thrown’ and fighting. He said he later saw a lady ‘hiding’ with a pram from the fans.

The witness added that children who happened to be nearby seemed ‘scared’ by what was happening.

Another video which appears to have been taken from a large block of flats shows police holding back a large crowd of supporters. Greater Manchester Police said that despite “isolated incidents of disorder” before kick-off, the event at Old Trafford on Saturday passed “largely without police incident”.