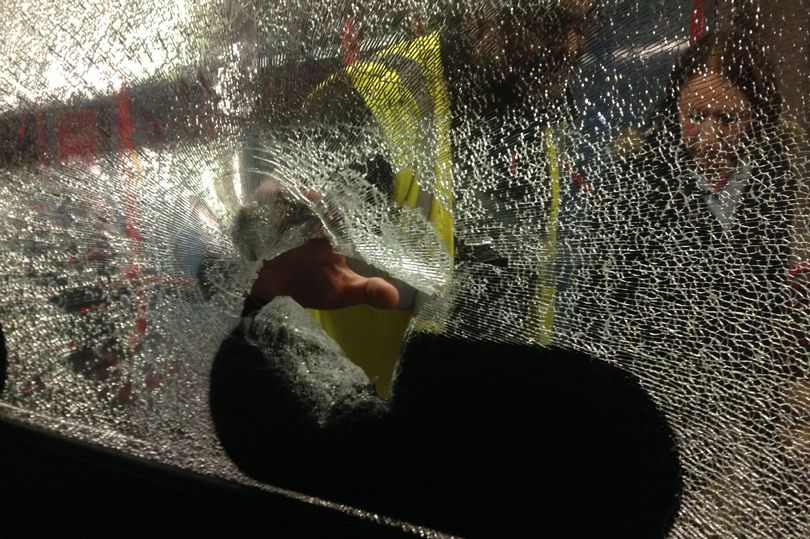 A bus driver from Leeds has opened up on the terrifying ordeal which saw youngsters launch fireworks at his vehicle in a mindless attack.

The incident, which happened in York Road at around 6pm on Wednesday, November 4, saw a gang of teenagers set a firework off in the direction of a double-decker bus.

The missile smashed through the main door of the vehicle, leaving both the bus driver and his passengers shaken as glass “shattered all over the cab”.

The bus driver, who wishes to remain anonymous, said: “I can confirm I’m OK and all my passengers are OK. No injures.

“All the passengers were great and checked on my welfare.

“Sadly I had one passenger a bit shocked as they were blind / partially sighted and they were unclear about what went on.

“But I reassured her, and the other passengers, and helped them out.”

He also went on to say that youngsters are “targeting literally anything on the road” with bricks and stones as the attacks have become far more frequent in recent weeks.

Things have become so bad in parts of Leeds that First Bus have had to temporarily withdraw a number of services in the past few weeks. The company has even threatened to suspend some services at certain times of day unless the attacks stop.

The encounters are not simply confined to one area of the city either, with more than 20 separate attacks recorded in the past fortnight in Whinmoor, Middleton and Halton.

Tom Bridge, operations director of First West Yorkshire., said: “This mindless vandalism is endangering our drivers and customers and we’re sure the communities will want to join together and do what they can to end this reckless behaviour before someone is seriously hurt or worse.

“The safety of our staff and customers is our highest priority and we are working closely with the police to investigate the incidents including the use of on board CCTV footage to help identify the individuals involved.

“Acts of vandalism cause significant interference to timetable arrangements, with damaged buses having to be withdrawn.

“We aim to source a replacement bus as quickly as possible in order to minimise disruption to our customers, but when vandalism occurs while the bus is in service, then it does inevitably and regrettably result in at least part of that scheduled journey being lost.

Health officials recommend level 3 limits in some parts of Yorkshire