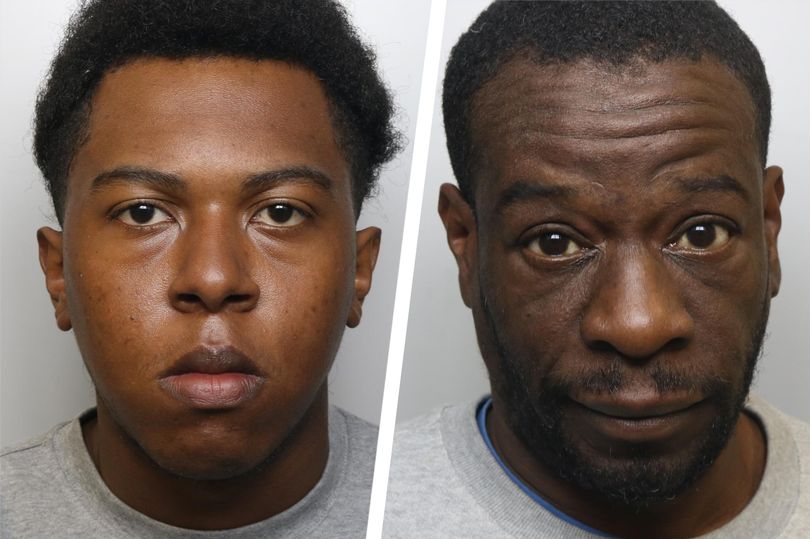 A Leeds shopkeeper had his life threatened while being robbed by two masked men armed with a machete and a hammer.

The victim was serving a couple in McColl’s newsagents in Woodhouse when Rakeem Njie, 20, and Michael Bennett, 45, burst through the front door wielding weapons.

He was confronted behind the till where Njie pointed his machete at him and shouted: “Do you want to die today? I’m going to slash this guy right now!”

The armed robbers also confronted a second member of staff as he counted money from a till before fleeing the store with around £200 worth of cash and tobacco.

Officers caught them not far from the scene and the incident was captured on the store’s CCTV.

Leeds Crown Court heard there was a bang and the female customer screamed before the men burst into the store on July 20 this year.

The CCTV footage was played in court and showed the robbers both dressed in black clothing, wearing balaclavas and carrying weapons.

Prosecutor Louise Gallagher said the pair went behind the counter and Njie pointed the 10-inch machete towards the shopkeeper’s body, shouting: “Do you want to die today? I’m going to slash this guy right now!”

Meanwhile, Bennett banged his hammer off the till and shouted: “Open this f**king till!”

As the shopkeeper was halfway through serving customers, he would have had to void each item before he was able to open it.

He was told to hurry up and asked where the safe was.

The shopkeeper showed the robbers to an office in the back of the store and opened the door while warning his colleague inside: “We’re getting robbed!”

The second member of staff was sitting down counting money from a second till and the robbers leaned over him to take the till.

Meanwhile, the shopkeeper went to wait with the customers in a corner of the store and they could hear banging from the office.

Njie and Bennett then ran out of the office and through the back door with a large Morrisons bag for life, smashing shelves as they left.

The shop assistant rang police while the second member of staff grabbed keys from the till and locked the door from the inside.

They then noticed CCTV equipment had also been smashed during the robbery.

It was estimated that the stolen till contained around £150-160 in cash.

At around 9.10pm that night, officers spotted Njie and Bennett running out of a steep, wooded area on Meanwood Road.

One of them was carrying the Morrisons bag but threw it away when they noticed the officers.

The bag contained money and packets of rolling tobacco and Njie was found to still have his machete.

The balaclavas and gloves were also found discarded during a search of the wooded area.

The shopkeeper later said he had been frightened and shaken up by the incident but he did not put much weight on Njie’s threats, adding: “I had a distinct feeling these two people did not want to hurt me.”

English words that have a different meaning in Yorkshire