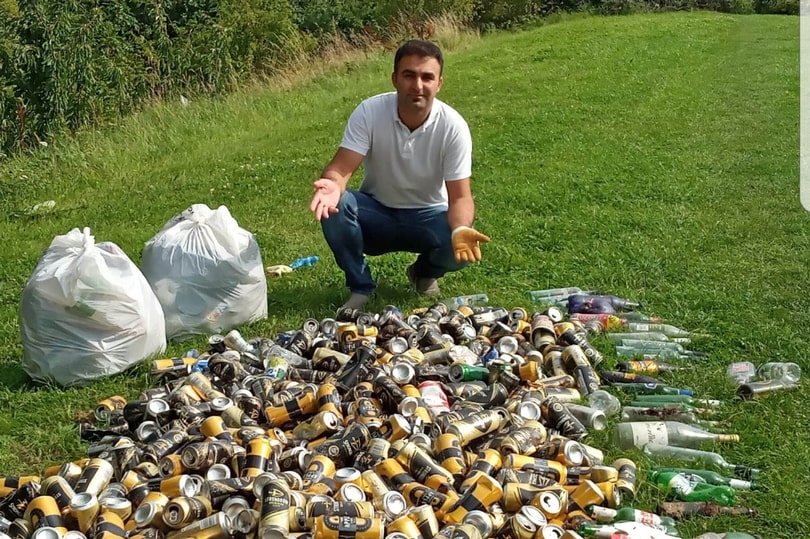 A Leeds man has been left appalled after he managed to find and collect 800 beer cans while litter picking in a local park.

Rebwar Sharazure, 33, picked and counted the alcohol cans and bottles by himself after spotting the rubbish scattered around Hunslet Moor Park on Friday 24 July.

He returned a week later, on August 1, to find drug needles and 66 bags worth of junk left by careless visitors.

Shocking pictures sent to LeedsLive shows hundreds of alcohol cans, bottles and plastic left in the open field space with some even thrown into bushes and onto a pathway.

Father-of-one Rebwar says it took him two hours to clean up the mess and says people should take more responsibility to tidy up after themselves and take pride in their area.

He said: “Some people don’t throw rubbish away and I feel responsible for keeping our community clean and to protect the environment.

“The problem is education, a lot of people rely on the council but is our responsibility to clean up after ourselves.

“The council can then use that money on something else, we can’t rely on the council for everything.

“A couple of hours a day or a week can make a lot of change.”

Rebwar runs monthly litter picking events in a bid to keep the community clean and protect the environment.

On Saturday (August 1) the group, joined by eight members of Kurdish House Leeds (KDL), Friends of Hunslet Moor and Cllr Paul Wray, picked 66 full bags of rubbish in the Hunslet area including “needles used for drugs”.

The week prior, he was joined by 33 members of the KDL group collected 70 full bags of rubbish.

Since the KDL group started picking litter around Leeds in December 2019, Rebwar claims they have picked 920 full bags of bags.