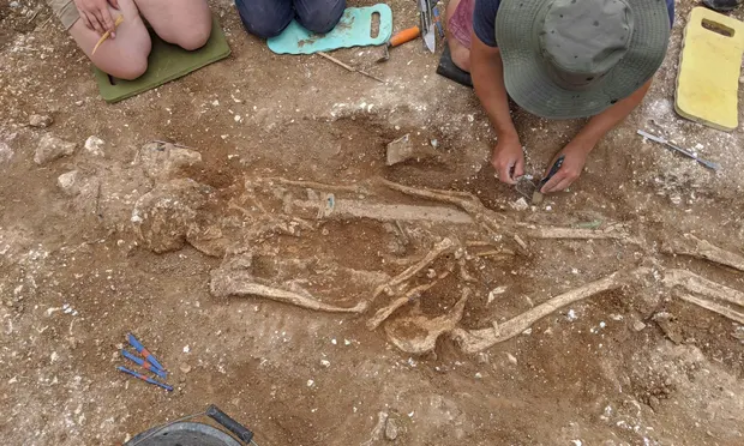 The final resting place of what appears to be an Anglo-Saxon warrior has been unearthed in a field in Berkshire, in a discovery archaeologists say sheds fresh light on the rise and fall of local tribes.

Buried with an array of weapons including spears and a sword with its scabbard, the skeleton of a man dating from the sixth century was found in August – two years after metal detectorists discovered bronze bowls at the site and alerted experts.

Dr Gabor Thomas, a specialist in early medieval archaeology at the University of Reading who worked on the subsequent excavation, said there had been much debate about whether individuals buried with such goods were warriors or were buried with weapons as a symbolic gesture.

But it seems the newly unearthed individual – known as the Marlow Warlord – could well have swung his sword in earnest: not only was he about 6ft but analysis of the skeleton suggests he had well-developed muscles.

“The word that comes to mind is pretty butch,” Thomas said.

He said that unlike many burials of the time, the Marlow Warlord was not buried in a cemetery, but set apart from the rest of the community. “He’s buried north-south, that’s his orientation, but directly overlooking the River Thames,” he said. “He is positioned deliberately to look over that territory.”

Thomas said that, taken together with his wealth, it suggested the man was a tribal leader – a conclusion that offered a new perspective on the area.

“We know from later historical sources and bits of archaeology that [this sweep of the Thames that runs through Marlow and Maidenhead] was a kind of borderland. At various periods in the Anglo-Saxon centuries it was contested between neighbouring kingdoms,” Thomas said.

“What this burial suggests is that [this area] had its own identity as a powerful tribal unit before these kingdoms muscled in.”

The bronze bowls and spearheads will be displayed at Buckinghamshire County Museum in Aylesbury, where it is hoped the other items from the grave will also rest once conservation and analysis are complete. To support such efforts the team has launched a crowdfunding campaign.

Experts will also conduct further examination of the skeleton to narrow down the man’s age, and explore whether he had any diseases – early signs of arthritis have already been found, while his teeth show signs of wear.

Prof Helena Hamerow, of the University of Oxford, who was not involved in the work, said the discovery was significant.

“We have few if any burials of that period from the middle Thames region that are so richly furnished, especially in comparison with the lower Thames and upper Thames,” she said, adding that some of the grave goods were likely to have been imported from what was now northern France or the Rhineland.

“Both the location and grave goods seem to be designed to project the power and importance of that individual.”