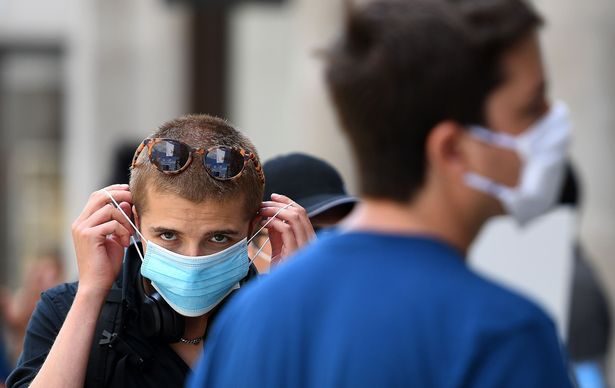 People grabbing takeaway coffee or food in England WILL have to wear a face covering, a Tory Cabinet minister confirmed today.

Brandon Lewis cleared up days of confusion over mandatory masks that launch in England tomorrow.

From Friday, it will be the law to wear a face covering in shops and supermarkets in England – with £100 fines for rule-breakers.

But people won’t have to wear a mask in restaurants or bars, because it is impractical to do so while eating or drinking.

That left confusion over the rules for takeaway food and drink outlets – like Pret a Manger or McDonald’s.

For days, ministers failed to clear up the situation before full laws are published later today.

Today Mr Lewis said you will have to mask up in a takeaway – depending on why you’re going in there.

If you’re sitting down and eating in the takeaway, you don’t need a mask. But if you’re paying for food or drink then taking it out, you do need a mask.

The Northern Ireland Secretary told Sky News: “Obviously if you’re in a food outlet it’s not practical to wear a face mask.

“If you’re going into Pret a Manger and you are eating in Pret a Manger, which in some of their stores you can, then obviously you wouldn’t be wearing a face mask because you’re eating.

“But it’s clear, good common sense that if you’re going in to buy a takeaway, and leaving again, you’re treating it like a shop – and you should be wearing a face mask.”

Asked if he was sure, after Tory ministers gave conflicting advice and Michael Gove failed to wear a mask in Pret, Mr Lewis replied: “Yes.”

Mr Lewis said people will also need to wear masks from tomorrow in high street banks and indoor petrol station counters, as those are effectively a retail outlet.

He told BBC Breakfast: “If you’re going into an outlet and you’re buying as if it’s a shop, you should be wearing a face mask.