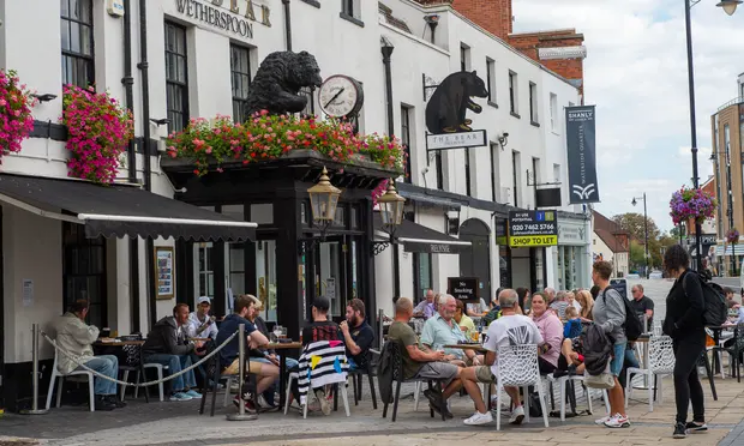 Shares in airlines, hotel groups and pub companies have tumbled, after it emerged that the government is weighing up tough new “circuit break” restrictions to avert a second wave of Covid-19 infections.

International Airlines Group, which owns British Airways, was the biggest loser on the FTSE 100, down 10%, while easyJet fell nearly 7% and the aircraft engine maker Rolls-Royce lost 5%.

Pub companies such as JD Wetherspoons and Mitchells & Butlers, along with hotels groups Intercontinental and Whitbread, suffered losses of between 3% to 5% as traders were spooked by the threat of curbs on hospitality.

Shares in NatWest, formerly known as RBS, slipped below £1 for the first time since the pandemic took hold, while Lloyds Banking Group was down by 3%. Both are seen as proxies for the health of the UK economy.

As stocks fell, the hospitality sector issued grim forecasts about the prospect for pubs, bars and clubs, which are still reeling from the first lockdown, if a second was imposed or curfews – already expected in the north east – were imposed nationwide.

“Curfews are devastating for our sector,” he said. “We are concerned about the narrative around hospitality being at partial blame for what’s going on. There have been schools and universities going back, illegal parties, households, that have all contributed to this in different ways.

“If we end at 10pm in the evening, we’ll end up with people looking for those additional hours, whether it’s an illegal event or continuing the party at a household.”

Kill said other countries such as Germany had avoided such drastic measures by putting efficient test-and-trace systems in place.

Dave Mountford, a publican, said many pubs would close for good if they were forced to close again at short notice with no extra financial support.

“Unless we know there’s a package in place to support us, this is going to be quite devastating and I don’t envisage a lot of pubs reopening., said Mountford, who is spokesman for the Forum of British Pubs.

He said pubs would be left with stock they could not use and predicted that those in city centres would be hardest hit, as well as those that did not serve food and therefore, had not benefitted from either the VAT cut on meals or the eat out to help out scheme.

Mountford said many publicans were now faced with huge bills from large pub companies that had deferred rents during the first lockdown but were now collecting the delayed payments on top of monthly rents.