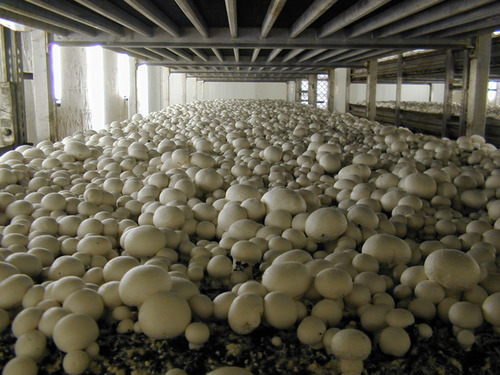 Jon Swain and Mike Bond toured the UK and visited two overseas locations for the Innovate Waste Heat to Fruit & Veg project, which is also closely linked to the Agriculture and Horticulture Development Board’S (AHDB) GrowSave activity. They looked at the future of growing without gas and alternative sources for the required heat and CO2, writes Mike Bond, Senior Engineer at NFU Energy. This project, which opened in 2019, was visited in Sirjansland.

“During the UK tour, six well-known faces from British horticulture were with us. In Newark, we saw how Springvale Farm has created a circular economy around its Anaerobic Digester and Biogas CHP, with plans to set up a “green” charging station on the nearby A1. At the NFU York, we heard presentations on CO2 capture from Future Biogas, which has the first permit in the UK to capture CO2 under the sea. And we heard about AirCapture, whose floor-to-ceiling tower will allow air to flow over a membrane to extract the CO2. Then we visited the Drax plant, which now runs mainly on biomass pellets. We also heard an interesting presentation from C-Capture about how amines can be used to remove CO2 from flue gases, but not yet in the quantities produced by Drax.”

In Sirjansland, near Rotterdam, they visited a collective of three growers who worked together with biomass boiler manufacturer Vyncke and supplier of CO2 stripping technology Frames, to become independent of the gas grid. “Their 7 MW boiler will process low-quality local wood waste and mix that with higher-quality wood chips. Most of the heat is distributed among the 3 neighboring tomato and eggplant growers (with 25 ha under glass); however, part is used to power the CO2 stripping process, which consumes 0.35 MW of boiler overheating and produces completely dry CO2 from the boiler flue gases. All this at a competitive cost of 10 euros per ton, including the required energy and consumables. The CO2 is stored on site in domes and is directed to the growers together with the mandatory heat. This is done through a meter for a fair distribution of costs. We were surprised by the level of cooperation and the willingness of the parties involved to help each other.”

A waste power plant was visited in Hinwil near Zurich. “There, urban waste is burned so that a high CO2 compensation per ton of ash produced is achieved and valuable metals (from electronics and the like in the waste stream) are recovered. A total of 8.5 MW of heat with a usual temperature of 45°C is pumped over a short distance to two greenhouses on either side of the installation. The growers of these greenhouses consume 38 MWh per year; heat with a temperature of up to 150°C feeds a district heating network that consumes another 25 MWh per year. The EFW plant also exports power to the grid (none of the growers use lighting). By 2030, carbon filtering will be added, and this will consume part of the high-quality heat. The notable aspects of this scheme are: the fixed annual fee that the growers pay for the unmeasured heat (although the district heating network is measured); and the community involvement: the aim is to recycle energy instead of making a profit. The EFW plant, instead of being privately owned, is a collaboration of 36 communities that have approved its development.”

“Our challenge now is to make it happen here too!”, concludes Mike.