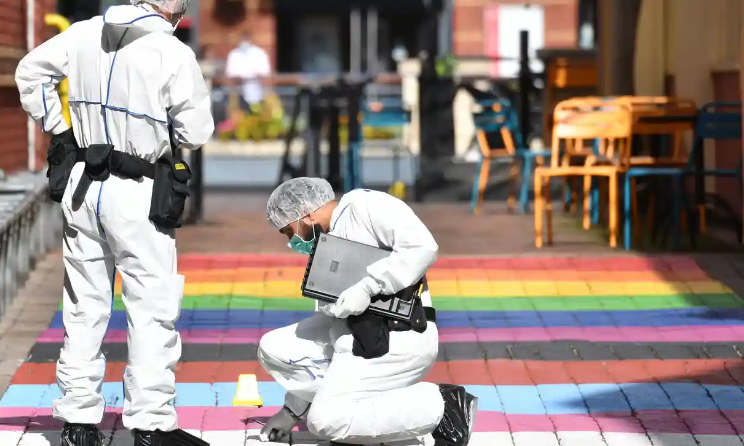 A 27-year-old man has been arrested on suspicion of murder and seven counts of attempted murder following a series of stabbings in Birmingham city centre on Sunday, West Midlands police said.

A male suspect was at large for 24 hours following the attacks, but on Monday morning police confirmed an arrest had been made.

In the early hours of Sunday, a sole male attacker launched a string of knife attacks spanning 90-minutes across the city centre, prompting the police to declare a major incident.

A 23-year-old man was killed in the attacks, while a man and a woman, aged 19 and 32, suffered critical injuries. Five other people, aged between 23 and 33, were also injured. They were treated in hospital, with two later being discharged.

West Midlands police launched a massive manhunt, and released CCTV footage of a man they said was wanted in connection with the incident.

Following the arrest, Birmingham’s police commander, Ch Supt Steve Graham said: “Officers worked through yesterday and into the early hours of this morning in a bid to trace the man we believe responsible for these terrible crimes.

“We issued CCTV footage of the suspect and had a strong response from the public. I’d like to thank everyone who shared our appeal and who provided information to the investigation.

“One line of inquiry ultimately led us to an address in the Selly Oak area this morning where a man was arrested. Clearly this is a crucial development but our investigation continues.

“We still need to speak to any witnesses who saw what happened who’ve not yet spoken to us, or anyone who may have video footage or photos of the incidents or the attacker.”

The force is facing criticism of its response to the attacks, including why the man was allowed to wander the city for as long as he did.

On Sunday, police said they had received a strong response from their appeal for help tracing the man, with a team of detectives working through the night to follow up lines of inquiry.